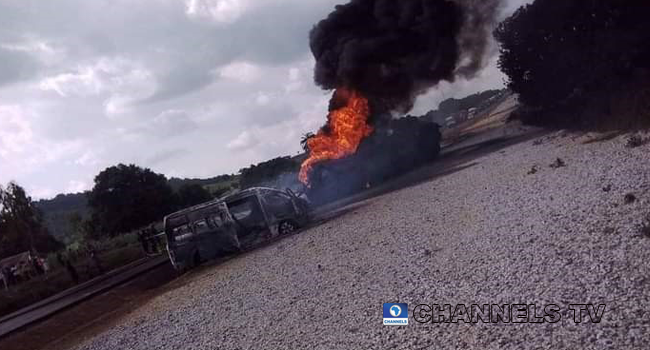 A road accident involving a diesel tanker and an IVECO tanker crashed around Bonu village along Lambata in Gurara local government area of Niger State, claimed the lives two while over 19 sustained various degrees of injury.

Eyewitnesses said two of the tankers immediately caught fire, which affected the Mazda 323 and BM100 18-Seater Boxer car, as well as a motorcycle.

A resident in the area, Abdul Sani told Channels Television via telephone that one of the tankers had wanted to overtake the other and, in the process, tumbled.

He said 17 persons, made up of 15 males and two females, were involved in the accident, but that only two persons got burnt in the crash beyond recognition, while at least seven others sustained various degrees of injuries.

Sani further said men of the fire service were able to put off the fire after battling it for several hours, while those who sustained injuries were taken to the Federal Medical Centre Gawu Babangida in Gurara local government for treatment.

As at the time of filing the report, the Federal Road Safety Corps in Niger State was yet to issue any formal statement on the crash.

At least 19 persons were said to have been involved in the accident.

However, the spokesman to the Chairman of Gurara Local Government, Halilu Bwaje said “Those that sustained series of injuries have been taken to the Hospital by the Men of the Federal Road Safety Corps and now they are responding to treatment at the FMC Gawu Babangida,”