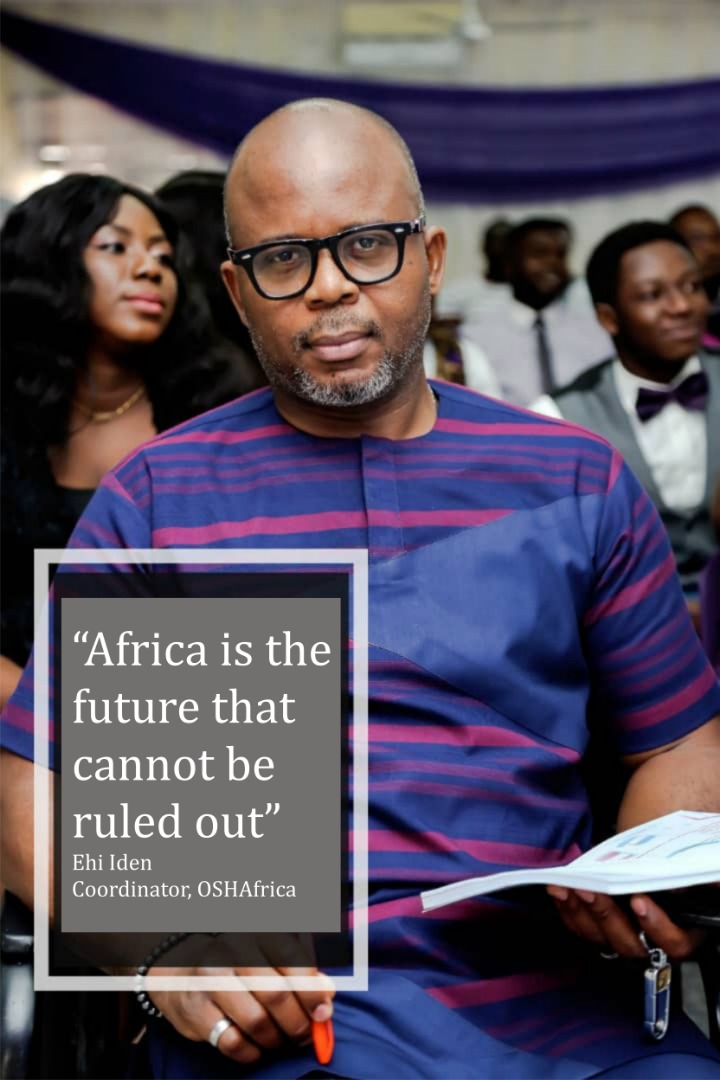 Mr. Ehi Iden is the current coordinator of Occupational Safety and Health (OSH), Africa, birthed with a vision to ensure safety of workplace in Africa. In this interview with HSENations, Mr. Iden talks about the growth of OSHAfrica, challenges of data collection in Africa, as well as plans for the upcoming OSH conference in South Africa.

Can we meet you Sir?

My name is Ehi Iden. I’m an Occupational health and safety consultant and a member of the Board of trustees, OSH AFRICA. I am currently the coordinator of OSH AFRICA, which exists in more than 35 countries in Africa and we are doing some great works to make sure workplace in Africa turns out safe.

The keynote that actually inspired OSHAfrica was the embarrassment that accosted Africans mostly in the international conference where we found out that virtually in all papers presented, there were worrisome statements that there were no data from Africa.

We later realized that we were working in silence and our works were not been published. And anything that is not published does not exist, so they could not find any data to use in the global workspace.

The meeting in South Korea became a springboard that set up OSHAFRICA. After the meeting, lots of people were no longer interested. But I took it upon myself and ensured that the efforts we invested in South Korea shouldn’t be a waste so I kept following everybody up and we started OSH local group with less than 6 members on the WhatsApp group. Gradually we grew to about 120 members and then started legal registration and here we are now.

What’s the vision and mission of OSHAFRICA?

It is primarily to ensure that any worker in Africa that goes to work comes back safe, unharmed, unmutilated and unhurt and that is what we are doing to keep Africa safe and healthy for workers. We are not saying we can take away all the risks but we will make all our contributions such that risks in workplace are significantly reduced to the barest minimum.

Don’t you think your mission and vision is in conflict with that of other agencies?

Well, in most agencies, we’ve seen that they work in their country; but we are an African occupational safety organization. We found out that a lot of bodies are doing their works in their country and this is the problem we also have in Nigeria. Nigeria does not know what is happening in other African countries, so what we’ve done in OSHAFRICA is to ensure that we’re able to bring everybody from other African nations together. Now, we already have members from over 35 countries.

We have 54 countries in Africa and we’re going there to ensure that every member-country comes on board and we start working with the association. The only way we can reach each country and go down the line is to work with the safety association in that country. So we need to have countries come on board first, then we start identifying where the OSH association is in the countries and start working with them. We also support them in everything they do to ensure that every worker in that country will feel the impact of not just OSHAFRICA, but through the associations in the respective countries.

How do you intend to confront the challenges of data collection in the health and safety industry?

Data was one of the key issues that gave birth to OSHAFRICA. What we’ve decided to do when we start OSHAFRICA work is to set up scientific committees. We set up 3 scientific committees. One of such is actually the one that focuses more on occupational health publication research and data. So the committees ensures that we are able to train our people. It’s not just the data most times because data not properly put well cannot be used in global reach. So we have to teach our people how to write a report. For example, what is happening in Addis-Ababa. In order to have it reported to us, we now have a group and the group gives us a latitude to take it to anybody in the world.

Africa is the future that cannot be ruled out, but because we have not put ourselves together everybody is working inside, nobody wants to talk to other countries. Now we’re going to talk to Europe and EU. We did not have such a body to talk to in Africa, but now we present ourselves as a body, we want to see what is happening in each countries and be able to publish it. If not well reported we will brush it up, and give it a standard that can actually make it qualified for international publication. That is what we are doing right now.

Tell us about your forthcoming conference?

This conference will give birth to a child with the hope of nurturing and educating the child, because it’s getting bigger than expected. We’ve started it and wants to fill in this space and ensure that every three years we are able to have a conference within Africa that speaks on OSH, but we found out that involvement of international communities is becoming so much than what we expected. It is going to be transition in safety in Africa, because every member country is getting involved. We have speakers in Africa, and people coming in from different countries speaking at this conference.

The high note is that ILO which became 100 this year are also using the conference to mark their centenary existence- program of 100 years in existence, including the IESA mining section which also turns 50 this year.  We also have a lot of artisanal mining in Africa that is not documented. The risk is so high so they have also decided to run a parallel mining section that talks about health, safety and exposure within the mining sector.

Things are going to take a new dimension. It is almost a year we have been planning it. It is an excitement that the first conference on occupational safety international is holding in South Africa. We will be having the Minister of Labour in South Africa in attendance and the director of occupational health and safety department in South Africa will also be giving a keynote address as well. Also, a number of Africa delegates and the African union is getting involved. Hopefully, it’s going to change the landscape in occupational and safety practice in Africa.

What challenges do you face in setting up an organization like this?

Setting up this association was really challenging. In fact there were some times I had sleepless night and thought of letting it go, but if I let it go history will not remember me positively. It will only remember me as a man who tried and failed, so I said no matter what it takes I will give it the best shot.

One of the first challenges was that people did not believe in it. Even after the meeting with them in South Korea, many were no longer interested and it took a whole lot of time and a whole contest from fellow Africans. I must say that if we must grow as a continent, we must learn to support our own. Immediately we launch our website last year, we got some notable international attention, even From ILO and WHO.

But when we talked about the hosting of the conference which happened in South Africa, we had a whole lot of contention from our African brothers and one of them was South African Institute of Occupational Safety and Health – SAOSH. They said we had to come through them before holding any conference in South Africa. We had partners and members in South Africa but SAOSH was not ready to talk to them. They also asked me who I got permission from in Africa before OSH Africa was set up, and who authorized it, and some members were agitated.

What we are also looking out for in OSHAFRICA is how we can rebuild Africa exclusive qualification, because most times we have international exams and what we talk about there aren’t what we see in Africa. That is because they are tailored in line with their environment. We have the Training Advisory Council (TAC) advisory committee in OSHAfrica that are trying to build up our safety training modules that speaks to Africa’s situation starting with the issue of OSH management and risk assessment as basic. So when we open up this training anybody all over Africa can enter the portal, do this training, finish the module and get certified, so that anywhere you go in Africa you present the certificate because it’s going to be co-certified by certain universities in the world mostly west.

Do you mean OSHAfrica is also going into certification?

Yes, because we have education and competency improvement committee. If you profile all the professions we have in Africa and look at our population we don’t have enough hands to manage the workplace. So what we are trying to do for any one that has passion for OSH is to develop a training to build competence with new skill and grant them certificate to practice.

How do you get funded?

What we did was personal funding, because if you want to wait to be funded, OSHAfrica will not start. Also, we sought for funds from colleagues and friends to get started. We haven’t taken any kobo from any company. But we plan to have membership fee paid by everybody- per-member which is $100 for three years; for organizations, $500; for student members, $50. We also seek for funds from international and other agencies. One among the things we want to do if we can access the funds is to look for countries where vision zero has been held and support the vision and also look out for those countries who would have loved to have vision zero but don’t have the capacity so we can use that to start up with them.

What will be your advice to the health and safety industry?