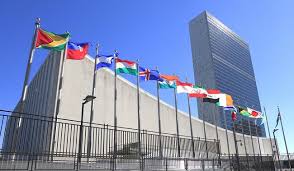 An accredited journalist covering the United Nations headquarters in New York has tested positive for the coronavirus (COVID-19).

Mr Tal Mekel, Head of the Media Accreditation and Liaison Unit of the organisation, confirmed this in an email to UN correspondents on Wednesday night.

“As you may have heard, an accredited journalist has tested positive for COVID-19. They are already free of symptoms and self-isolating.

“We have been informed that the individual was last at UN Headquarters on Thursday, March 12.

“They attended the spokesperson’s noon briefing and spent time at the Delegates Lounge and in the press area on the third floor,” Mekel said without mentioning names.

This is the second known case at the UN headquarters after a delegate from the Permanent Mission of the Philippines tested positive for the virus on March 13.

UN spokesman, Mr Stephane Dujarric, who confirmed the first case in a statement said the fellow met with two delegates from another mission at the complex on March 9.

“The delegate was last in UN headquarters on March 9 for about 30 minutes around mid-day and visited only one meeting room, which has gone through three cleaning cycles since then,” the statement said.

“The delegate did not have contact with UN staff but met two delegates from another mission. UN Medical services are reaching out to them,” he said.

The Acting Philippines Ambassador to the UN, Kira Azucena, reportedly said in a letter that the staffer was asymptomatic during the visit.

To check the spread of the disease, the UN has suspended the physical gathering of journalists at the headquarters for the daily media briefings by the Spokesperson for the UN Secretary-General.

With effect from Wednesday, the briefings would be held remotely until further notice, according to a notice to correspondents.- PMNews