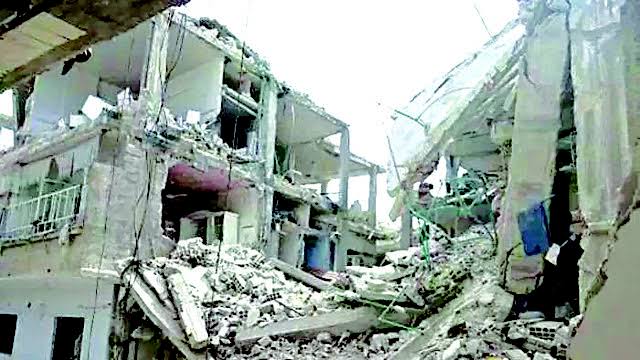 A two-storey mansion has collapsed in Lagos, Nigeria’s commercial capital, killing no fewer than one person instantly, leaving two with life-threatening injuries and trapping three others.

Eye witness accounts showed that asides the deceased victim and the three persons trapped under the rubbles, two persons, a male and a female, were rescued by residents and community response team after the building caved in on Monday night after the victims have slept.

“I have even slept when I heard the loud noise. I woke up immediately to the reality that calamity has befallen our neighnours. Some of them have also slept when the house carved in on them.

The collapsed building
“So far, they have evacuated one dead body, two others with life threatening injuries were also evacuated and rushed to ikorodu General hospital. But unfortunately, the head count still suggests that about three people are still unaccounted for. We fear they are still trapped under the rubble,” Igbagboyemi Esther, an eye witness who lived close to the scene, told Platforms Africa.

The ill-fated two-storey building was said to have been sited on 97, Lagos Road, Haruna axis of Ikorodu, and according to residents, the building came down at night when some of the occupants were about resting after the day’s work.

Before the building caved in, officials of the Lagos State Building Control Agency (LASBCA) have reportedly ordered that residents vacate the building after it failed integrity test conducted to ascertain it’s habitation status.