Another Petrol Tanker Goes Up In Flames In Onitsha 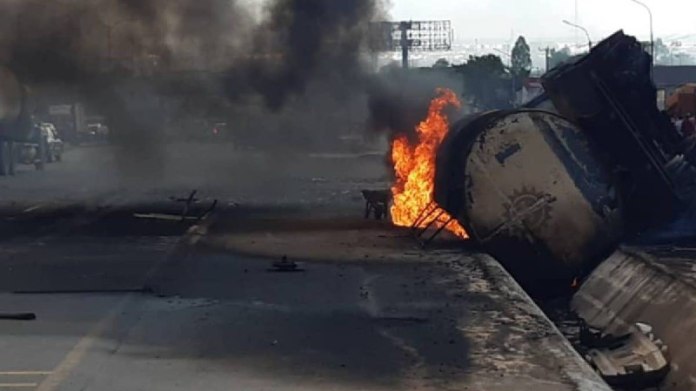 Residents of Onitsha, Anambra State, were yet again on Friday 17th January, awoken to the rude shock of a burning petrol tanker in the city.

HSENations gathered that the tanker conveying about 15,000 litres of petroleum products, suddenly went up in flames at about 2 am.

Petroleum tanker fire has remained a recurring disaster in Anambra State, since 2019, leading to a ban on the movement of tankers conveying petroleum products during the day by the state government.

The state Police Public Relations Officer, SP Haruna Mohammed, who confirmed the incident, said the truck was loaded with a premium motor spirit (PMS) and parked by the roadside along Onitsha/Awka Expressway by Vin Oil Filling Station, Onitsha when it went up in flames.

“The scene was cordoned off, and the situation was brought under control and obstruction cleared to enable free flow of traffic in the area after the fire was put off at about 03:30 am.

“Cause of fire is yet to be ascertained, but the truck’s overcharged battery is suspected. No loss of life or injury was recorded during the incident.

It was gathered that the incident had caused a huge confusion among residents of the area, as they woke up in the middle of the night, upon the news and scampered in many directions.

A source said that even though the head of the truck had been completely gutted by fire, the truck’s tank with its product remained intact and did not explode.

“A new tanker has been ordered for trans-loading of the 15,000 litres of fuel being conveyed by the ill-fated tanker,” the source said.

The truck and entire goods were consumed in the inferno, but the driver, Chimilezie Aneke, aged 45years of Osile quarters Ogbunike and other occupants escaped unhurt.