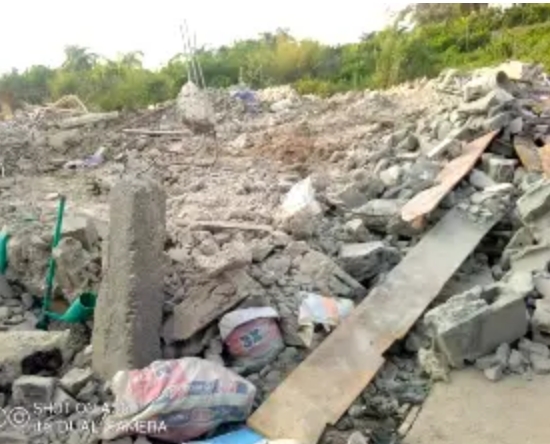 Up to Four people have died while five others were injured when a one-storey building under construction collapsed on Wednesday at Flourmill Estate, Magbon, near Badagry, Lagos State.

A witness, Oluwagbenga Ogundele, told the News Agency of Nigeria (NAN) that the building collapsed on the nine construction workers on site around 3 p.m.

Ogundele, who works as security guard near the site, told NAN that residents were alerted to the scene by a visitor to the site.

“The visitor was not in the building when it collapse, it was him that called for assistance while policemen from Area ‘K’ came to rescue them.

“We were able to rescue five alive because they were calling for help, while four of them gave up the ghost.

NAN also reports that the five injured labourers were taking to Catholic Church Hospital, Magbon, while the four dead bodies had been deposited at Badagry General Hospital mortuary.

One of the elders in the Estate who spoke on condition of anonymity, told NAN that the building had been abandoned by the owner for close to six years before work resumed on it recently.

“It was recently that a new owner started building another floor on top to make it a storey building.

Farinloye said that four persons died while five sustained injuries during the collapse.

NAN reports that officials of the Lagos State Building Agency (LABCA) have sealed up the premises of the collapsed building.