Assessment Of COVID-19 Safety Compliance In Schools Across Nigeria 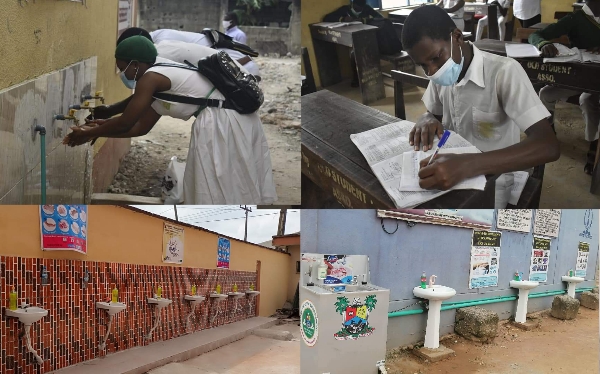 Several states across Nigeria opened the doors of academic activities on Monday, August 3 following the decision of the Federal Government to open schools in the country to allow students in exit classes prepare for their terminal examinations like the Senior Secondary School Certificate Examination (SSCE).

The reopening comes after four months of closure following the COVID-19 pandemic. Like every other sector, the reopening is to follow safety guidelines and measures against COVID-19 like social distancing, use of face masks, hand washing, temperature check, among others

HSENations undertook an assessment of the situation based on the level of response among students and the state of preparedness to meet COVID-19 health conditions across several states.

In Lagos State, secondary schools started reopening for SS3 and Technical Studies (TEC3) students since Monday, August 3, 2020, as directed by the state government. At Oduduwa Senior Secondary School along with the popular Ladipo spare part market road, Mushin, students wore their face masks and sanitised their hands before they were allowed into the school premises. Also, at Agidingbi Senior Grammar School along Lateef Jakande Road, temperature of teachers, students and visitors were checked with infrared thermometer.

In Ogun State, final year students in public and private secondary schools resumed in an impressive manner for the last lap of their academic activities. At some schools visited in Abeokuta metropolis, it was observed that hand washing buckets and sanitisers were provided at their entrances, corridors and other strategic points in the premises.

In Kwara State, schools has also resumed for the exit classes in preparation for the final year exams. When our correspondent visited Government Girls Secondary School along Maraba area in Ilorin, students were being ushered into the premises with strict adherence to COVID-19 safety protocols. The State government on Monday also said it has gave out 65,000 facemasks for distribution across schools. The masks were distributed to exit class students as part government’s efforts to flatten the curve of COVID-19 transmission.

Similarly, Bauchi State Ministry of Education recently issued a communiqué on guidelines for school resumption. It stated: “All students must come to school with at least one washable face mask. All schools must make provision for at least one gate (monitored by teacher who must be stationed permanently at the gate.”

“He harped on the need for social distancing and functional clinic in schools.”

Chairman of the Anambra State Universal Basic Education Board (ASUBEB), Patrick Ugboaja, said that, in line with the Federal Government’s directive, the Agency had provided buckets of water for hand-washing, sanitisers, among others.

However, it was observed that public primary and secondary schools in Bayelsa are yet to adhere to the Federal Government’s protocols against the coronavirus (COVID-19). Our correspondent visited some schools in Yenagoa and observed that none of the schools visited was keeping to the rules. Though the state has inaugurated a committee chaired by the Deputy Chief of Staff, Dr. Peter Akpe, on safe re-opening of schools, the situation in the schools remains appalling.

In Enugu, there was no resumption of schools as some students who had gone to their schools in anticipation of the reopening, were sent back home on the orders of the state government. It was learnt that they were told to go home and await further directives on the date of resumption. Commissioner for Education, Professor Uche Eze, who spoke on the development, insisted that no school in the state would reopen until Friday, adding however, that only SSS3 and JSS3 students would be allowed to resume. He stated that those expected to be in school as from Tuesday, August 4, 2020 were teachers in exit classes, adding that government would use between Tuesday and Thursday to train them on how to handle the returning students amid the COVID-19 pandemic.

In Osun, the State government on Tuesday announced that it has commenced fumigation of 188 registered public and private schools in the state ahead of students’ resumption.

Meanwhile, KADUNA State Government has directed that no studies would commence until Monday, August 10. A statement by the state’s Commissioner for Education, Dr. Shehu Muhammad informed that the Kaduna State Ministry of Education directed all principals to make arrangements to receive SS3 boarding students on August 9; and day students, on 10th August.

In Bayelsa State, the state government announced that it has donated hygiene and protective equipment to both public and private schools in the state. The state government said it also trained teachers and other education stakeholders on COVID-19 protocols.

Schools in Niger State didn’t resume as planned by the federal government because there was no circular or directive from the state government to that effect.

But in Benue State, students resumed school, Monday, amidst low turnout as fear of COVID-19 was still in the minds of parents.

Recall that the Nigeria Union of Teachers had expressed anxiety over decision to reopen schools across the country.

National President of Nigerian Union of Teachers (NUT), Dr. Nasir Idris, expressed fear that measures put in place by federal and state governments were not enough to keep staff and children safe.

The NUT President said the union was also concerned about students spreading the virus at school.

“Primary and secondary school students are very young people; they will be more vulnerable. Besides, by the time they see their classmates after these four months, some of them will forget about the issue of washing of hands, using hand sanitisers and face masks. They will continue to hug themselves and, at the end of the day, many will be infected.”

‘We urge Federal Government not to only provide the needful for unity schools because the bulk of the population of students are in states and local governments. About 95 percent of schools are in states.”