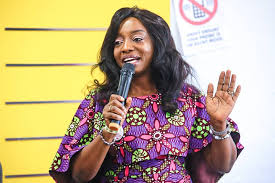 Wife of the Lagos State governor, Ibijoke Sanwo-Olu  on Thursday said the state government would intensify awareness among residents on the devastating effect of kidney disease.

The governor’s wife said this at a programme to commemorate the World Kidney Day 2020, with theme ”Chronic Kidney Disease: Stop the Epidemic in Africa (Kidney Health for Everyone Everywhere).”

The symposium to commemorate the World Kidney Day was organised by Kidney Foundation for Africa in Lagos.

Sanwo-Olu said that kidney disease was widely acknowledged to be a major killer of human beings, hence, the need for the state government to intensify awareness.

She said that hospital-based findings revealed that about 13 per cent of Nigeria’s population suffered from Chronic Kidney Disease (CKD), which was capable of leading to kidney failure and result in death.
According to her, this percentage does not include patients who lack access to hospital care.

“However, available data from the World Health Organisation (WHO) equally show that about 2 million people in Lagos State are suffering from CKD.

“For the administration of Mr Governor, Babajide Olusola Sanwo-Olu, this is not acceptable and concerted efforts are being made to create awareness on the causes of the disease and the prevention methods to adopt to nip it in the bud and stop it from afflicting the people.

“The health and wellbeing of residents is paramount to this administration as aptly demonstrated in the Health and Environment component of the THEMES Agenda.

“The agenda is the policy thrust of Mr Governor’s vision for Traffic Management and Transportation; Health and Environment; Education and Technology; Making Lagos a 21st Century Economy; Entertainment and Tourism; as well as Security and Governance,” she said.

Mrs Sanwo-Olu said that the state government was doing all within its power to facilitate the reopening of the Cardiac and Renal Centre (CRC) in Gbagada to enhance screening and treatment of kidney related diseases.

“The state government has also been conducting the State Wellness Week designed to create awareness and screen residents free of charge for Hypertension, Diabetics, Breast Cancer and Cervical Cancer, among others.

“The truth is that the awareness aspect is critical because people must be made to come to terms with the fact that they are, first of all, responsible for their health and wellbeing.

“It has been well-established that there are several ways to reduce the risk of developing kidney disease.

“Since prevention is far better than cure, we need to educate the people to embrace healthy lifestyle choices such as eating balanced diet, engaging in regular physical activities, and maintaining normal body weight, among others.

“Emphasis must also be emphatically placed on reducing the risk factors which include Diabetes, High Blood Pressure, smoking and obesity,” she said.

The wife of the governor commended the Kidney Foundation for Africa for creating awareness about the disease, supporting post-transplant patients with the very expensive drugs and patients on dialysis.

She also commended the foundation for firming up plans to build a Kidney Hospital which, upon completion, would drastically reduce the cost of transplantation, among others.

Also at the event, Dr Ebun Bamgboye, a Consultant Nephrologist said that the kidney failure prevalence in Africa, which was higher than anywhere else in the world, must be controlled by early detection.

Bamgboye said that the average African was four times more likely to develop kidney issues than the Caucasians (white population).

He said that there was the need to recognise, identify and screen sicknesses like hypertension, diabetics, sickle cell to detect early enough for proper management and reducing the speed of progression of renal failure.

“Our National Health Insurance Scheme covers only a few sessions of dialysis. So we must ensure that policymakers and stakeholders are informed about the significance and magnitude of the kidney failure,” the Nephrologist said.