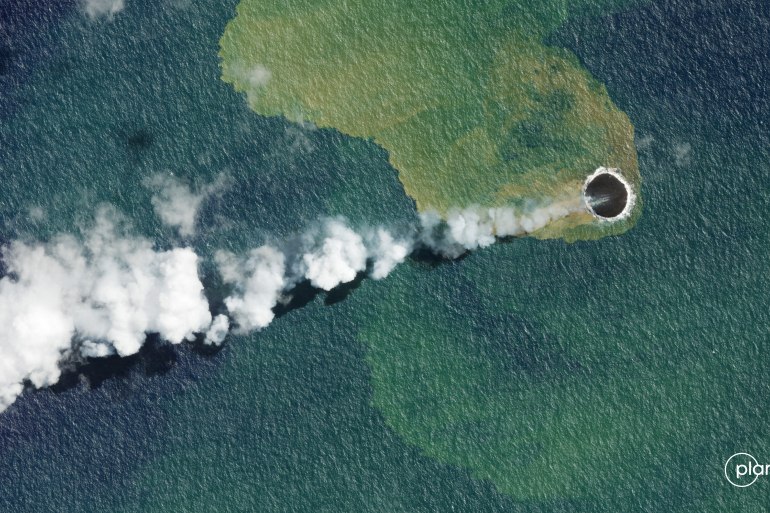 A volcano north of Tonga’s main island has erupted eight times in the past 48 hours, according to the Pacific nation’s geological service, which has warned mariners to keep their distance from the area.

The Home Reef volcano has erupted over the past 10 days – oozing molten lava and shooting steam and ash at least three kilometres (almost two miles) into the air – with six eruptions recorded in the previous 24 hours alone.

Home Reef’s eruption currently poses a low risk to “residents of Vava’u and Ha’apai” – two of Tonga’s most populated islands, the Tonga Geological Services at the Ministry of Lands and Natural Resources said on Tuesday.

Pilots have been warned to use caution when flying through airspace near the volcano after the aviation alert level for the Home Reef was raised to orange, one step below an emergency, the geological service said in a statement.

Mariners have also been told not to sail closer than 4km from Home Reef and to look out for falling ash.

“Monitoring of the Home Reef eruption is ongoing with daily notices issued on the status of the eruption,” the geological service said.

Seismic activity is fairly common around Tonga, a small archipelago nation with about 100,000 people spread across 171 islands, but warning levels were raised by one notch on Tuesday as the pace of eruptions quickened at Home Reef.

In January this year, Tonga was rocked by the eruption of the Hunga-Tonga-Hunga-Ha’apai volcano, which was one of the most powerful in modern times, according to researchers from the University of Bath.

The blast, which felt “like an atomic bomb” according to local aid workers, created a 15-metre tsunami that killed three people, destroyed villages and severed Tonga’s communication cables, leaving the country cut off from the world for weeks.

New Zealand, which straddles the boundary between the Pacific and Australian tectonic plates and experiences significant volcanism and earthquakes, increased the alert level on Tuesday for a volcano located below the country’s biggest lake.

In a statement, the country’s geological agency GeoNet said that it had detected almost 700 small earthquakes below Lake Taupo, the caldera created by the giant volcano, and had raised the volcanic alert level to 1 from 0.

The volcanic alert system is based on six escalating levels of unrest, but GeoNet notes that eruptions may occur at any level, and levels may not move in sequence as activity can change rapidly.

GeoNet said this was the first time it had raised the Taupo Volcano alert level to one, but this was not the first time there had been unrest and said the chance of an eruption remains very low.

GeoNet said this was the first time it had raised the Taupo Volcano alert level to one, but this was not the first time there had been unrest and said the chance of an eruption remains very low.

“The earthquakes and deformation could continue for the coming weeks or months,” the agency said.

Taupo is believed to have caused the largest volcanic eruption on Earth in the past 5,000 years when it last exploded about 1,800 years ago and spewed more than 100 cubic kilometres of material into the atmosphere.