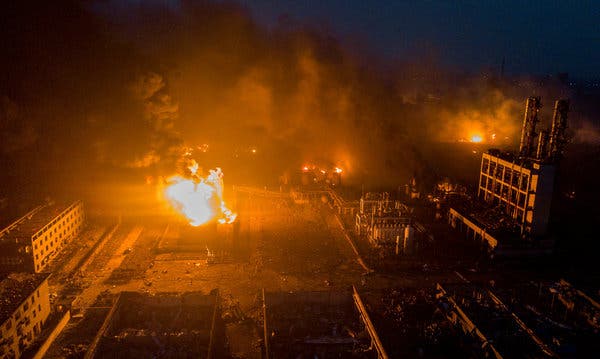 Fire rocks chemical factory in the north-western city of Rouen, France, on Thursday, forcing schools and creches in 13 towns and villages to shut down.

HSENations reports the affected factory is known as ‘The Lubrizol factory’ and it produces additives for lubricants and paint.

A local prefecture revealed that the fire broke out at about 2.00 a.m (0040 GMT) with 200 firefighters tackling the inferno.

The prefecture advised people coming into contact with soot from the fire to wash their hands properly and wash all fruit and vegetables before consuming them.

Authorities disclosed that first analysis carried out showed no acute toxicity in the air.

For safety purpose, people were urged to stay indoors and avoid smoke.

Prefect Pierre-Andre Durand told the newsmen that additional chemical analysis of the fumes from the harsh light up will be done with appropriate measures taken to check any pollution of the Seine river, which flows through Rouen.