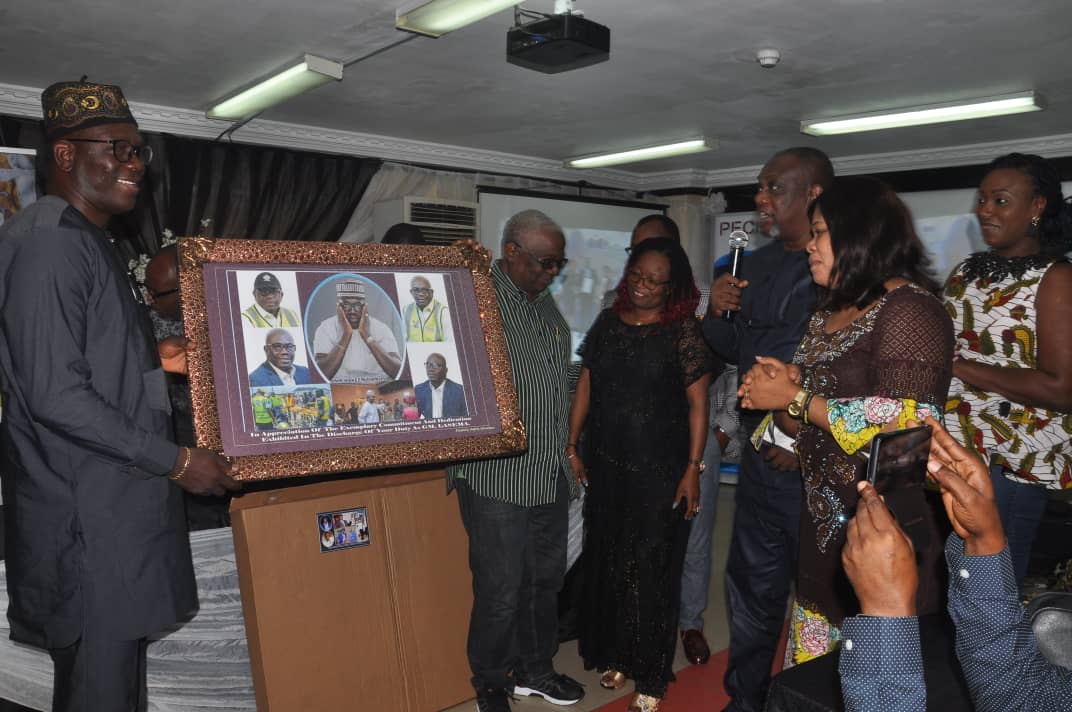 The Former Director General of Lagos State Safety Commission, Hon. Hakeem Dickson and General Manager of the Lagos State Emergency Management Agency (LASEMA), Mr. Adeshina Tiamiyu, have been commended by Safety professionals across the country for their outstanding performances while in office.

They spoke at a gathering put together by  safety stakeholders to honour the two personalities.

Friends and well-wishers showered praises of selfless service. Here are some of the comments:

“Everybody has said good things that qualify them but there is something we have learnt here today from the two gentle men, well i have not met Adesina closely but from what we have heard about him this morning we are now laying emphasis on leadership, commitment, visibility is about commitment accessibility is about commitment and with what they have told us this morning is that all they have achieved is because they have shown commitment in what ever thing they are doing, so that’s the lesson we have all learnt, and I can only say thank you to these two gentle men”.

“I think that as a safety group in Nigeria especially in Lagos state we have not come to a point in the last ten years, so Dickson has become a rallying point for us, it’s because of his method and approach of leadership we conveyed together today. Interestingly when he was made the DG I wrote a letter personally and then we had to revive and send to the state Governor to say we don’t want him, but in less than few months after that he became the toast of everybody, I think it’s more interesting when you see somebody who does not even know about the industry at all becoming a rallying point in the industry and that’s what Dickson has done for us and we are very excited about it”.

“I don’t know Adesina very well; the truth is that not having a one-on-one contact does not change the fact that you can see the works that the person has done, for me he is one of the best thing that has happened to Lagos state when it comes to emergency management because he came into the management as a weaken but he was ready to learn, and when you’re ready to learn and work with those who are ready on ground you will succeed. I think he succeeded largely on the fact that he was a selfless leader who was ready to do the right thing”

“I have a lot to say about Hakeem Dickson, he is an humble person. I learnt this work I can’t precisely say he had no experience about safety from beginning, but in the cause of the duty he learnt it and he professionalized on it. Well, he has been very good on the job and what I wish for him is for him to go higher”

“Well for Mr. Adesina, It’s unfortunate I have not had any direct contact with him. Well, from what I have heard from people and seen I think he has performed better because people do not talk bad of him, to talk of responsiveness in the duty I think he is number one which I personally have been hearing in social media, television and all sort of electronic media,. I think he is a very nice man LASEMA and Lagosians will really miss him”.

“Adesina is a gentleman he came to the agency without any background of HSE in the LASEMA field on getting there he learnt and relates with both senior and junior officers, so as to understand the doing of the job, he has been very generous and he has what is called the human relation aspect of managing staff.

“For Hakeem Dickson, I have not worked with him but I know him as a politician very jovial ready to learn and a no nonsense man, with stories heard,  he is a go to man when you have something to offer”.

“Both of them are great achievers the Lagos State government can never forget so soon,they have raised the bar and their performances will speak for a long time in the country.” Chief Kofi Sadu, Ex-Director of Exxon Mobile

“I was one of the people that endorsed Dickson’s rejection letter on his first appointment into the agency, but today, Dickson has proved to be an achiever through self-discipline, humility and a motive to learn. This man has done a great job, he created a conducive atmosphere of welcoming everyone. They are both not just a leader but visionary leaders who always make themselves available to everybody as long as Safety and Emergency is concern.”